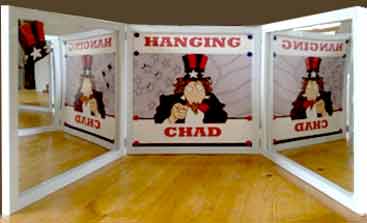 The presidential election of 2000 was decided by Florida’s voting district over hanging chads. The expression relates to an incompletely removed punched chad.
The United States holds seven different voting systems with two of them having two different variations. It is almost impossible to educate the voters on the how to vote what opens gaps to discrepancies on the vote counts and misleading results.
As 2012 elections approach the questions are:
1. Will the results be once again defined by a technicality?
2. Who is being hung?
The Facebook meme represents all of us Americans’. Your reflections on the mirrors reinforce your participation on the “voting/hanging” process.
P.S. In urban language Hanging Chads is also known as hanging shit. Great analogy hum?!
Claudia Jacques